I think a lot of people think baking bread is hard work, and after a couple of less than spectacular results, they just give up. Some bread recipes are full of ingredients and steps, make a mess in your kitchen, and are downright confusing! That’s how I felt about bread until a couple of years ago.

It was necessity that forced me down the path of making my own bread. All our local franchise bakeries started to die as the supermarkets began baking. The supermarket bread is fluffy, white, and tasteless, but let’s face it, the franchise bakery bread wasn’t really any better.

I found a little whole food bakery down in Fremantle who did everything by hand with wild yeast and starter cultures—tasty, but expensive. The biggest problem with them was that they were usually closed by the time my day finished, so that didn’t help me much, but it did give me a taste for real bread!

I liked the sourdough in particular, so I made a starter culture and diligently fed it every day for three weeks. I only bake bread a couple of times a week, so after three weeks of feeding the starter daily, it kind of slipped my mind. A few weeks after that, the starter was feeling and looking neglected, so I sent it to try and find new friends in the bottom of the trash bin. This is why I don’t have goldfish, or any pet incapable of coming and reminding that it is dinner time.

Operating under Management orders, I bought an electric bread machine, and that was great! I used a bread mix from the supermarket and got fluffy white bread every time, but I’d been spoiled by the odd loaf of artisan bread I’d been able to get, and I wanted more. In particular, I wanted taste (any taste) and texture!

It was time to work it out! If a stupid electric box can make bread, I should be able to! With a bit of scratching around on the Internet, I found several versions of the now infamous “5-minute” artisan bread technique developed by Jim Lahey from the Sullivan Street Bakery and originally published in 2006. Why hadn’t I heard of this before? Now 5-minute bread is just not happening—there is no way you can make and bake bread in 5 minutes—but a 5-minute prep and no electricity is something I’m definitely up for.

The process makes a simple wet dough, just roughly mixed the day before and left on the counter to proof. The secret is using a Dutch oven or crock pot as a seriously hot mini oven and letting the over-hydrated dough provide steam as it cooks, developing a fantastic artisan crust.

Mix all the ingredients together in a bowl to form a rough dough. Remember, this bit only takes 5 minutes of your time, so don’t be too fussy; rough enough is good enough!

Cover the dough with cling film and leave it on the bench to proof. 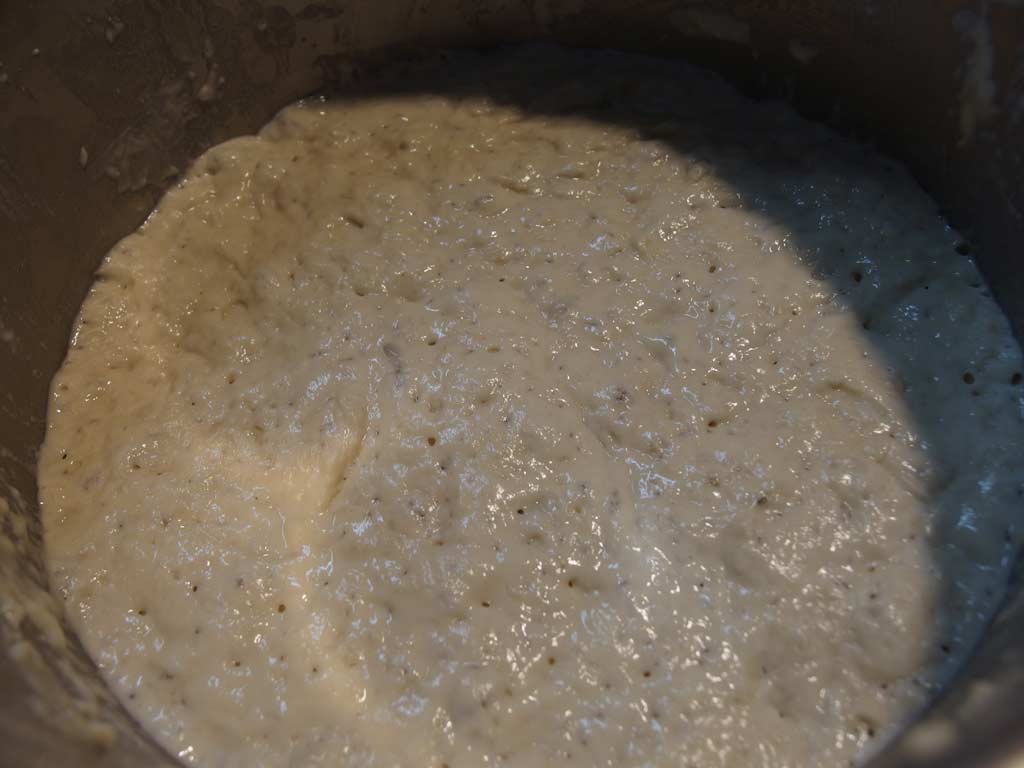 Place your Dutch oven in your cooker and get it hot; you want it and its lid to be at 240 degrees C (465 degrees F) to bake bread.

While the Dutch oven is heating, tip the dough out onto a well-floured surface and fold it a couple of times to form a rough loaf. Be careful not to knock all the air out. Using a sharp serrated knife, put a few slashes in the top of the loaf to allow for expansion. Remove the loaf from the pan and let it cool on a rack. What if, like me, you don’t have much of a head for the day-before thing?

Well, I started to troll back through some of the old methods I’ve used and pulled out a killer “Fast Bread” recipe I’d had some success with before. 5 minutes prep, an hour to proof, and then bake!

Mix the yeast and the sugar in the bottom of the mixer bowl, then pour the warm water over it and whisk it gently until they’re combined. In 10 minutes, the yeast should have activated, and the mix will be foamy.

Fit the dough hook to the mixer, start it on low speed, and slowly add the flour and salt mixture to the foamed yeast and water while the mixer is running.

You need to judge how much of the remaining cup of flour to add—you want a soft dough that is still firm enough to hold its shape. The dough will start to come together and pull away from the sides of the bowl. Knead the dough in the mixer for a few minutes.

Tip out the dough onto the counter and form it into two loaves. Slash the top with a sharp serrated knife. While the loaves are proofing, preheat the cooker to 240 degrees C (465 degrees F) with the Dutch oven inside for about 30 minutes.

Transfer the loaf to a cooling rack. The secret here is using the Dutch oven as a mini bread oven and having the bit of steam from a wet mix to give you a reliable “artisan” crust. It’s a great confidence booster, not to mention tasty bread each time, so if you are a bit bread shy, try these two methods and you’ll find yourself thinking bread isn’t that hard after all! Now I’m starting to look at some of the other things I can do with breads.

This recipe first appeared in Issue 34 of StoryQue magazine. You May Also Enjoy These...

Please log in again. The login page will open in a new tab. After logging in you can close it and return to this page.